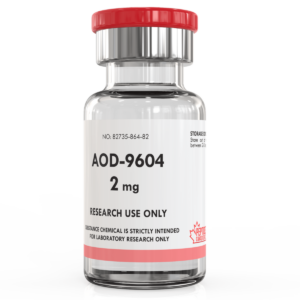 Stimulation of the Pituitary Gland

AOD 9604, a.k.a. Tyr-hGH Frag 176-191, has the ability to burn fat without overheating. It has no effect on tissue growth or blood sugar (Ng 2000; Heffernan 2001). Oxidation (fat burning) and degradation are activated by AOD 9604 with an approach that doesn’t involve an HGH receptor. This is because it has an action mechanism of its own unassociated with HGH. Lab studies using dogs, humans, and rodents have isolated AOD 9604 as the mechanism that triggers a release of fat from predominantly obese fat cells. This minimizes new fat accumulation inside of fat cells and expedites fat burning. The most extraordinary aspect of AOD 9604 is the capacity it has to minimize stores of abdominal fat. CJC-1295 is another strong fat loss peptide, as it increases GH levels throughout the body (of course, the reverse is what typically happens as people age). This is a big reason people gain more weight the older they get. If fat loss is the only goal you have, it’s prudent to refrain from using GHRP products (GHRH’s, GHRP 6, or GHRP-2), as they may raise your cortisol levels and increase your hunger. Conversely, AOD 9604 neither raises cortisol nor increases hunger.

The Advanced Obesity Drug (a.k.a. AOD 9604) was initially developed during the 90s in Australia’s Monash University by a professor named Frank Ng. Professor Ng endeavored to develop an anti-obesity medication that mimicked HGH’s fat-burning abilities, sans the muscle growth.

Recent research revealed that, besides the fat loss properties it has, AOD 9604 also contains regenerative properties with growth hormone connections. Trials are taking place as we speak to determine how effective AOD 9604 is on patients with hypercholesterolemia and osteoarthritis, as well as its effect on cartilage and bone repair.

The findings of an oral tolerance test for glucose revealed that, in conjunction with HGH, carbohydrate metabolism is unaffected by AOD. The amount of anti-AOD 9604 antibodies that were detected in subjects specifically chosen were zero. No subject experienced any adverse effects or withdrawals in all studies pertaining to AOD 9604 intake.

AOD 9604 has an impressive tolerability and safety profile, though they are the same as the placebo effect. AOD 9604 didn’t produce any negative side effects when used with pH treatment. The safety profile of AOD 9604 is outstanding and has recently obtained a status of Human GRAS in America.