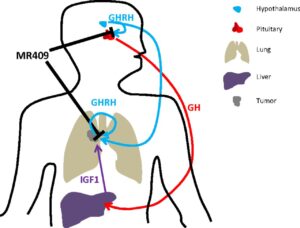 The synthetic growth hormone-releasing hormone (GHRH) analog is comprised of 30 different amino acids. GHRH can effectively increase the secretion of IGF-1 and growth hormones without affecting GH secretion pulsatility in an adverse way. CJC-1265 is sometimes used in conjunction with Ipamorelin because of its heightened GHRH-specificity. The peptide produces similar growth hormone secretion increases, sans the stimulated appetite and increases in aldosterone, prolactin, acetylcholine, and cortisol (as evident with peptides of its kind). This particular peptide has proven to be harmonious with Ipamorelin and well-tolerated.

The hypothalamus is where GHRH is produced. After its release, pulsatile GH is then released from the body’s pituitary gland. Time-wise, GHRH is only active for a handful of minutes (a “half-life” is the duration necessary to eliminate 50% of substances from your blood. The briefer this duration is, the more quickly substances can be removed from your body, and as such, have less of an effect on it).

The first GHRH amino acids (29 altogether) are the most active portions. They are accessible to a synthetic peptide known as sermorelin. This peptide was modified to extend the half-life duration to a long as 30 minutes. The result: CJC-1265, which is modified even further when Drug Affinity Complex (DAC) is added to it. Albumin is a blood protein that DAC binds to, and is able to extend the half-life duration to as long as eight days. This is known as CJC-1265 + DAC. Also, CJC-1265 can be compounded to a non-DAC format, which replicates a regular physiologic spike in GH every night.

The extended half-life resulting from the binding of DAC albumin means that injections are necessary only twice a week, at most. Having said that, a fairly regular blood level and extended half-life will result in an ongoing GH release stimulus from the body’s pituitary gland (by way of a non-physiological GHRH receptor). The amplitude of the GH calls can go down, which can lead to a minimization of GH tissue.

When a long-lasting CJC molecule is used, it is safe to take a “hormone holiday” of 90 days every 3 to 6 months. Doing so gives the pituitary gland some recovery time. During this time, rather than using CJC 1295 + DAC, sermorelin will be used instead. These hormone holidays can reduce the development of a GH intolerance. This may come about from antibodies that form before binding to a GH, rendering it inactive. It can also form when reduced GH receptor amounts are found on tissues (they are down-regulated). These concerns are merely theoretical, as there haven’t been any long-term research or studies conducted to shed more light on these issues.