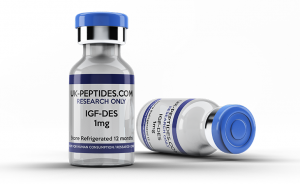 Study participants were administered either CJC-1295 or a placebo in one of four ascending single doses for the first study. The dose was changed to two or three weekly doses or as a biweekly dose for the second study.

The main outcome measures for the study were peak concentrations and areas under the curve of GH and IGF1. The placebo for the study was used with the standard pharmacokinetic parameters.

One injection of CJC-1295 was enough to increase mean plasma GH concentration by between 2- and 10-fold depending on the dosage. The increase lasted for up to 6 d or longer. It also caused an increase in mean plasma IGF1 concentrations, with increases of between 1.5 and 3 times normal levels. The increase lasted between 9 and 11 d. CJC-1295 presented an estimated half-life of 5.8 – 8.1 d. Following several doses of CJC-1295, mean IGF1 levels remained above the baseline for up to a further 28 days. There were no serious adverse side effects reported during the study.

Administering CJC-1295 to subcutaneous fat resulted in dose-dependent but sustained increases in IGF-1 and GH levels for healthy adults. It was proven to be safe and relatively well tolerated, especially with doses of 30 or 60 microg/kg. The study showed evidence that the effect became cumulative with repeated doses. This data supports the prospect of using CJC-1295 as a therapeutic agent.